April 22, 2009
Marc Egnal’s new work on “The Economic Origins of the Civil War” is sure to raise plenty of eyebrows. As he himself admits on the last page of the book, his perspective is “hardly fashionable”.

In a nutshell, Dr. Egnal opines that throughout America’s great era of compromise (the Nullification Crisis, the Missouri Compromise, and the Kansas-Nebraska Act) our country was closely tied to common, agrarian economic interests which allowed people of differing opinions on the issue of slavery to work through whatever crisis faced the country. Political divisions were based more on class (the wealthy and the urban dwellers were Whigs, while smaller farmers and workers were Democrats) than on regions.

However, with the industrial development of the northeast and, more importantly, the mid-west, these ties gradually became more regionalized. “This economic interpretation emphasizes the materialist roots of secessionist ideology. It grounds the defense of slavery both geographically and temporally. For the most part, the champions of secession came from the southern reaches of the states from South Carolina to Mississippi and similar districts in the other cotton states. Typically, these Southern rights leaders had little involvement with manufacturing and took no part in the overland exchanges that were transforming the Border States, parts of the Upper South, and scattered districts of the Lower South.” (page 264; the emphasis on geography and time is Egnal’s.)

Personally, I have always found that the role of slavery as a cause of the war, though certainly significant and fundamental, has nevertheless been mythologized. The war was a highly complex event and, in my opinion, came about as a result of a range of issues with slavery being the most emotional. These emotions fired the politics of abolitionism and secession alike.

I believe why Americans fought our bloodiest war cannot be fully understood in any political or even racial sense. My preference is for a more sociological interpretation. A clash of cultures, as it were. Tribes. But, this isn’t about my take, it’s about Clash of Extremes, an interesting new work of history.

Dr. Egnal observes that ardent southerners left the union in two waves, not all at once. First, the Deep South left rather quickly because it did not have the intrinsic economic ties alluded to in the above quote. Those states clearly seceded because they thought the north was going to choke the lifeblood out of slavery, the foundation of the southern economy.

But, the Upper South and the Border States chose not to secede immediately. This is rather significant because, while there were fewer slaves in these states, this region contained large majorities of whites who believed slavery was a natural part of life. Yet, secessionists in these states could not persuade a majority to vote for disunion with the mere election of Abraham Lincoln.

These states held more direct interests and ties to the booming mid-western economy and, therefore, believed that compromise was still possible as in the past. It was only when Lincoln called for 75,000 volunteers against the Deep South that the Upper South found enough cause to secede.

The Republican Party was born an anti-slavery party. But, it recieved no serious respect until the 1856 elections. Suddenly, in two states – Michigan and Wisconsin – the Republicans lead in the majority of counties. Throughout the lower mid-west, New York and Pennsylvania a very large minority of counties became Republican. The New England states were almost solidly Republican.

But, this still wasn’t enough impact the outcome of the 1856 election. Afterwards, several influential Republicans steered the party toward the issue of internal improvements, building rails and canals by which greater commerce could flow. This, along with its position on tariffs, caused the party to become more acceptable to a wider range of people. The economic message of the Republican Party, along with the radicalization of the Democratic Party by prominent southerners, solidified the north.

You must recall that the other major party in the 1856 election was the Whig Party, a party that had been around for many years. The Whigs vanished during this election, many of them becoming Republicans. Egnal doesn’t emphasize this point but the fact is a major political party (the Whigs) lost one election cycle and was virtually erased by a party (the Republicans) that only a record of about 2 - 4 years existence. That was a rather remarkable, abrupt occurrence.

The abolitionist appeal that the enslavement of Africans was morally and ethically wrong, wrought the emotional birth of the Republican Party, but the destruction of the Whig Party came only after the Republicans seized the banner of economic progress and won the election of 1860. The split of the Democrats into a "northern" and "southern" party also was signifcant.

The shock that the dissolution of the Whigs and the rise of the Republicans had on secessionists was like lightening. Egnal points out the largest fight to stay in the Union among the Deep South took place in Alabama because northern Alabamians were tied by economic infrastructure to Tennessee and Kentucky and beyond. South Alabama was tied more to the port at Mobile. Slavery was prevalent in both sides. The difference was that northern Alabama still didn’t think Lincoln’s election was sufficient to leave the Union.

There was a basis for believing in compromise. Egnal writes: “During the 1820s, 1830s, and 1840s North-South patterns of trade, the strong growth of the cotton kingdom, and parties rooted in class rather than geographical divisions kept the country together, despite contentious sectional issues. After midcentury the rise of the Great Lakes economy along with the spread of antislavery sentiment transformed the North. In the South the disappearance of fresh soils and concerns about the long-term survival of slavery altered the outlook of the cotton planters.” (pp. 347-348)

The act of secession, according to Egnal, “reflected the rational interests of one group of Southerners.” Further, “an appeal to ‘slavery’ as the cause of secession no more explains the deep divisions in the South or the timing of protests, than do references to repression and paranoia. A reasoned response to economic change provides a more satisfactory explanation for secession and the Civil War.” (page 286)

Egnal’s attention to the fact that secession occurred in two phases for different reasons is a powerful argument. Also, his reasoning is sound that the sudden end of the Whig Party, a national political force historically aligned with the ideals of compromise, and replaced almost overnight (in a political sense) by an anti-slavery party galvanized radicals on both sides.

But, the Republican Party’s performance in 1856 was bettered in 1860 only after it tempered the slavery issue with the at least equally important economic concerns of the day. The slavery issue alone was insufficient to get Lincoln elected and the election of Lincoln alone was insufficient to lead to the secession of the Upper South. These facts put slavery in its rightful place, as the issue of critical importance only to abolitionists of New England and to secessionists of the Deep South. For the rest of our nation, the economy drove much of the ensuing events, according to Egnal.

I find this interpretation appealing, though personally I feel the issue is still more complex than Egnal makes it. For me, the best way to interpret the coming of the War Between the States is more of a sociological one rather than political or economic. It was a clash of two cultures, one traditionally agrarian, and the other progressively industrial. The factors that supported each culture (which include slavery, of course) en total bring the picture better into focus.

Still Egnal’s work is significant because it offers a reasoned, factual counterpoint to the revisionist social criticism that masquerades as history in contemporary academia. (Ken Burns comes to mind, though I respect his artistic style.) Slavery was no more or less a cause of the war than the disintegration of the Whig Party itself. It was merely the most emotional of many reasons.

For me personally, I’ll stand by Clement Eaton’s rationale as offered in his classic work A History of the Old South. Speaking of the Southern Confederacy, “The rise of this new nation was a part of that romantic nationalism of the mid-nineteenth century that was agitating Europe. Far more important among the emotional forces propelling the Southern people to seek independence, a motivation that has been grossly underestimated by historians, was the call to uphold Southern honor (today, in contrast to 1860 in the South, honor seems to be in disrepute).” (page 504)
History Reading

Popular posts from this blog 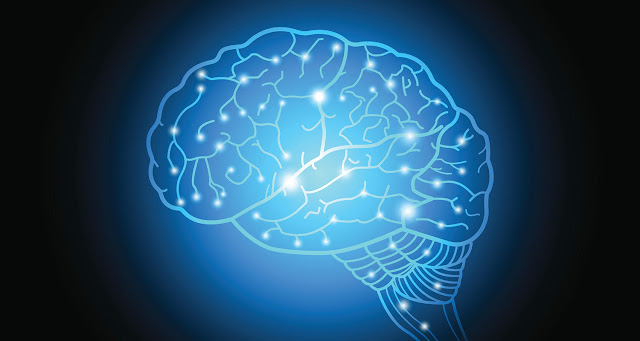 Image credit. Nietzsche believed that you and I do not possess a singular, constant self but, rather, a multiplicity of instinctual drives.  The sex drive is the most obvious one.  But we have all sorts of drives...for success, knowledge, freedom, recognition, power, closure, validation, etc.  If you can think of life as a “quest” for something, that something is most likely one of Nietzsche's drives.   Neuroscience and Buddhism agree with Nietzsche about our shifting sense of self.  Our brains have evolved to accommodate a plurality of possible selves, depending on which instinctual drive or combination of instinctual drives most influences our lives at any given moment.  Human brains are hardwired to express drives, likely because drives have a high survival value.  The survival instinct itself is a drive.  Having conquered survival, for the most part, contemporary life still relies upon a multitude of drives (quests, efforts, ambitions) that created it. When a baby
Read more

Parsing Out Dystopia: Waiting for the Indian Variant 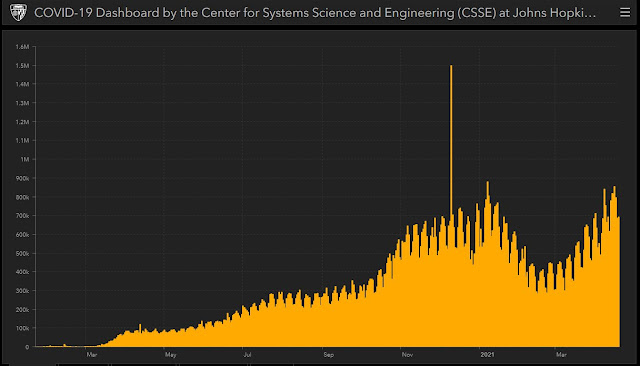 The worldwide daily number of COVID-19 cases recently set an new high as we clearly are in a second wave of the pandemic globally.  This is a graph from the excellent Johns Hopkins interactive site . The number of confirmed new daily cases in the US are down sharply from the winter months.  Nevertheless, it has plateaued for the moment between 80,000 and 60,000 new cases per day. I got my second Moderna jab last week.  By May 1, I should be as protected as medically possible against the virus.  I am looking forward to going out to lunch and dinner in restaurants again.  To seeing my friends from Atlanta.  I am a hermit and an introverted person by nature but even I'm ready to get some social interaction. The truth is that this is all an experiment.  Statistically, I have about 4 chances out of 10,000 of still contracting COVID-19.  Several thousand people who were inoculated have already gotten it anyway, according to the CDC .  But, apparently none of them died from it, so the v
Read more

Keith
No sense in going on about all that. You'll just have to see for yourself.